EngagementDiversity & InclusionThe importance of culture when solving diversity and inclusion

The importance of culture when solving diversity and inclusion

Solving the issue of Diversity in the workplace that has been an ongoing task for the past 20 years. In wake of her talk at HRD Summit, we talked to Angela Roseboro, Head of Diversity and Inclusion at Dropbox to hear her thoughts on these challenges. 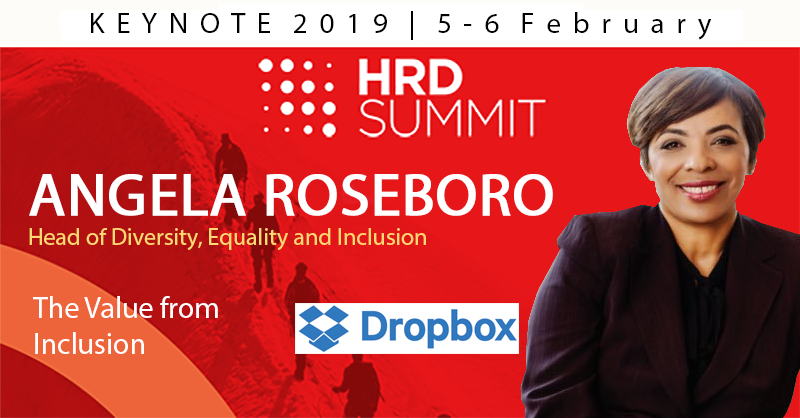 What is your current role?

I’m head of Diversity and Inclusion at Dropbox, the bulk of my role is to create strategy and action around how do we increase our representation and diversity, as well as having a culture where we can see to that, so when I think about my role it’s two things. It’s about making sure that we have the best talent, and making sure that that talent feels empowered to do great work. There are a number of ways I see to that, one of the main ways is looking at diversity in the broadest sense of the term, part of it is allowing these groups of people to succeed, and attracting this group of people.

What are the biggest challenges

If you say to someone that diversity is good for your business, everyone knows it is a positive thing, but there are many aspects of diversity that aren’t embraced at the moment and people don’t always do that intentionally but the impact is the same. So the biggest challenge is really focusing on behaviour that allows people to actively be inclusive and be aware, and embrace difference in the room. There seems to be a fear around saying the wrong thing, so a place where people can be open around these topics is a challenge. And thirdly is a constant role and more transformational you’re always starting and finishing and completing because you’re always transforming culture and people, so the work is never done.

How important is culture when dealing with diversity and inclusion

I think culture is a huge part when looking at any aspect of diversity, because it’s one thing to say hire different people, whatever their diversity is whether it’s cultural whether it’s gender or race, but another thing is expecting them to gel, you can’t expect different people to come in and for them to all be the exact same. With big corporations especially we like to bring in different people, but we expect them all to be the same, but that just isn’t the case it doesn’t work that way.

For small start-ups I think that’s the biggest opportunity, my goal is that in the future my job doesn’t exist, and with these small start-ups they can be intentional in the beginning, when starting out they have the best ideas available, the best perspectives and the best talent, and if they deliver that in the beginning, then they won’t need a role like mine, because you have the right culture like that to exist.

I do, I feel like the notion of accepting diversity is the thought that you have to treat them fairly and differently, and I think the interesting thing now is that people get to choose where they work, the conversation around this has changed, before it was ‘here’s how diversity wins you money’ and now it’s ‘here’s how diversity wins you talent’ because people want to be themselves at work, it’s a big shift where people choose their jobs, 20 years ago you get and stay in a job to be loyal, you don’t have that anymore, and if businesses want to succeed they have to detect and adapt to these changes.

What does the future of Diversity and Inclusion look like?

Strategy & Leadership 2020: HRD Thought Leaders on the biggest trends of of the year to come

I started this job 20 years ago and I’d thought it would be done in 5, that is great in terms of my career, but sad that this role is still needed, if companies don’t have someone making these calls or making sure that different types of talent are being brought in then it just wouldn’t happen. When we see more start-ups and other companies making a concerted effort to making these changes, then you’ll see roles like mine beginning to diminish. So I think with new companies coming up, there are some difficult conversations that we need to have. The world is changing at such a fast pace that this is becoming more of a conversation now which is a huge positive.

What do you plan to talk about at HRD Sumit?

It will be based around the whole conversation of diversity and inclusion and what we can do to prevent it. And not just about how we can tackle this, but the significant impact that this can have on people that are affected by it.

1m Dave Ulrich
2020: HRD Thought Leaders on the biggest trends of of the year to come

Strategy & Leadership 2020: HRD Thought Leaders on the biggest trends of of the year to come

2m Michael Hocking
Do You Possess the Top Two Most In-Demand Skills?

How to improve employee diversity and inclusion in the workplace

2y Angus McCarey
Diversity and equality in the workspace

Diversity & Inclusion Diversity and equality in the workspace

2y Laurie Cohen
The art of people at Shakespeare's Globe

Diversity & Inclusion The art of people at Shakespeare's Globe